Growing Up With Kinky Hair. Why Do I Feel Ugly?

Young girls are learning hate themselves so early these days because social media is giving them false images of perfection. Girls are starting out younger and younger questioning their looks and how they compare to the rest of the  world. When I think back to my childhood, I recall a white boy telling me my hair was too nappy to do everyday. Who was he in my life? And why did he think it was okay to speak on what was on top of my head? Society sets too many beauty standards, that our young brown skin and kinky hair little girls do not fit into. Below is the story written by Blogger Candidly Kim. Her story is touching and speaks to the little brown girl experience in all of  us. I know many of us can relate to this story. What are your thoughts?

Mommy, Is My Kinky-Curly Hair Pretty?

I remember when my daughter was in Kindergarten, I came to pick her up from after-school-care and her eyes were extremely red from crying. I figured it wasn’t anything detrimental because they would’ve called prior to me arriving, but I was still pretty concerned. The teacher said when they asked her what was wrong, she didn’t want to talk to anyone about it. She just wanted to sit out the recess time which, if you know my daughter, is completely unheard of.

As I carried her, walking out the building, I am thinking “Well did she have an accident on the playground? Did she get into an argument with one of her best friends? I couldn’t quite piece together what happened. So I got her in the car and asked her the million dollar question “Baby, what’s wrong?” She replied “I couldn’t play Rapunzel with the other girls because my hair wasn’t long enough.” I was like what???? Obviously no little girl hair is as long as Rapunzel’s so I was confused. She said it again, “I couldn’t play the Rapunzel game and everyone laughed at me. My hair isn’t pretty.” 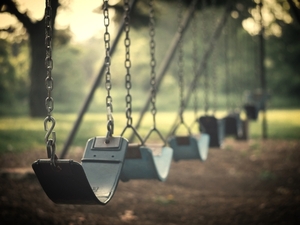 To say I was furious is an understatement.

It was at that point I realized that this could be an ongoing discussion with my daughter for years to come; not just about hair length but about its perceived association with an individual being pretty. I couldn’t dismiss this because I too struggled with not having the “long hair” down my back. When I was growing up, the pretty girls were considered to be the ones that was either very fair in complexion and/or had long pretty hair. 20+ years later, and this is still an issue that sweet little girls have to deal with.

I first reassured her that her hair was in fact pretty and she is as well. I asked her to name people besides herself that she thought were pretty and she began to name family members and friends. Then I asked her, “do they have Rapunzel hair?” She replied “no.” “Everyone has their own definition of what pretty is, and that’s OK,” I said. I proceeded to drive this point home by saying “Focus more on what the word pretty means to you and lets not worry about what other people think.” Lastly, I asked “why does mommy think you’re pretty?” She replied “because I am a good girl and I use my manners all the time.” I laughed at that response but I was also relieved that it was more about character and it wasn’t about her looks. I said “Exactly...but don’t forget that it is also because you are truly a beautiful girl...inside and out.”

We got through that day, (almost 5 years ago) but everyday, we still have to discuss this topic: Why couldn’t my hair be more straight? When will it finally touch my back? This has been a battle that my daughter fights with all the time. Often, I have to remind her that length and/or texture does not determine whether or not someone is pretty. It’s just one aspect of that person. But I have to admit, it’s sometimes challenging to convince a child that length isn’t important when society is so focused on it. Before the Dreamworks movie Home, I couldn’t find a movie or sitcom that had a child on there that resembled hair that was just like hers. When she saw that movie her eyes lighted up.

Another thing that I did, recently in fact, was to embrace my own hair by going natural. I didn’t even see that me wearing extensions was contradicting until my daughter referenced it one day. She said “When I get older I am going to do my hair just like yours” Initially I responded “Awww” until I realized what my hair looked like (straight and long via extensions) and what her struggle was. It took me a couple months but eventually I stopped wearing the extensions. Even though I don’t see anything wrong with wearing extensions, I had to do what was necessary to ensure that I resemble the look I’m trying desperately to convince my daughter of. So I did it! I do, however, allow her to wear braided extensions from time to time. Mostly to give my hands a break from having to do her hair every night and also because she loves it. But I let her wear them with the understanding that this does not make you pretty; what’s inside matters more and will take you farther in life.

She loved my natural hair, and I loved it even more. She said “You look a lot like me now; people are going to confuse us.” I laughed and teared up a bit because she didn’t know this, but she helped me face those little girls from my past as well. 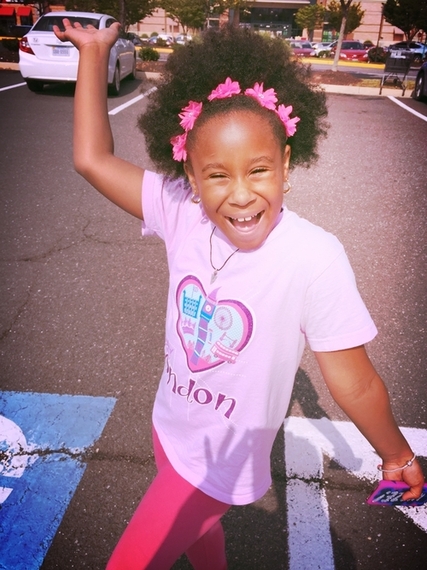 We still have work to do, but I am so grateful that we have made some progress thus far.